Home  |  Dr. Bernice King   |  Bernice King: The Pope and my father, united in the same dream 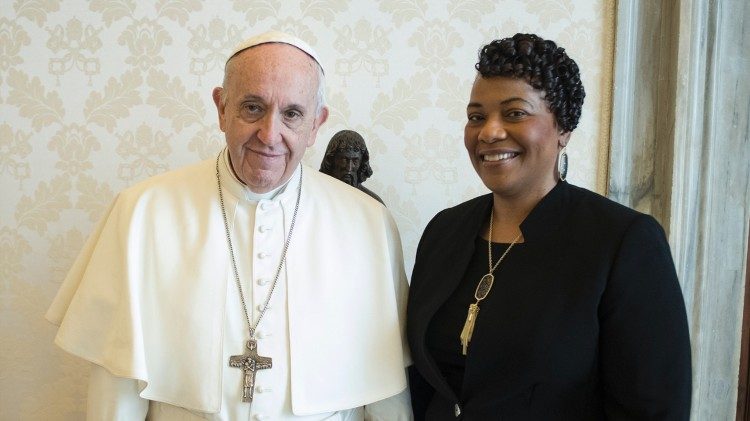 Bernice King: The Pope and my father, united in the same dream

Just after Freedom Day, celebrated by African Americans with particular emotion after the killing of George Floyd, Martin Luther King’s daughter reflects with Vatican Media on the nonviolent battle for equality and underlines the particular harmony between Pope Francis and her father.

On Friday, the African American community celebrated Juneteenth, the day that recalls the end of slavery. It was on June 19th in 1865 that Union Soldiers arrived in Galveston, TX, declaring the end of the Civil War. Referred to by millions of African Americans as Freedom Day, this year’s celebration takes place in a particular climate due to the growing protests surrounding the barbarous killing of George Floyd by a policeman in May.

L’Osservatore Romano and Vatican News interviewed Bernice Albertine King, daughter of Martin Luther King, Jr. regarding her dedication to equality, the culture of peace and the value of nonviolence. A passionate human rights activist like her father, and president of the King Center in Atlanta, Bernice Albertine feels there is a strong sense of harmony between her father and Pope Francis whom she met with twice in 2018.

Not only the United States, but the entire world, is shocked by George Floyd’s death. Do you think this time the changes that did not take place in the wake of similar tragic killings of other African-Americans in the United States will take place this time?
I think that, because the world was already on alert due to COVID-19, the video of George Floyd being so callously and cruelly murdered by a police officer was an even more vitriolic indictment of America and of the world, really. Millions around the world seem to have realized, as my father said, that “we are confronted with the fierce urgency of now.” Law enforcement agencies, faith-based organizations and corporations are reaching out to Black leaders with a “What must I do to be saved?” type of response. Some corporations are providing tremendous resources to organizations that focus on social justice and racial equity. Other companies are looking at how to create a cultural climate conducive to establishing true racial equity, from the board room to C suites to supplier diversity. A number of law enforcement agencies are reexamining their policies. Some of these agencies have already started to reimagine what community engagement can and should look like beyond the act of policing and with the inclusion of concern for social services. I do believe that the reactions and responses this time are more widespread and passionate, with more white people than ever before joining in protest. If we unite further with focus on strategic goals, we will prove to be more productive for the cause of justice.

In addition to the “evident” racism that we see in such tragic situations, there is another form of “racism that does not make the news”: racism at work, in education, in living conditions. Covid-19 has affected the African-American community much more than the white community in the USA. How is it possible to defeat this “invisible” racism?
First, let me say that I believe people’s refusal to see is what makes systemic and institutional racism seem invisible. The more we want to see and the more we want to effectuate change, the more evident the destructive, dehumanizing nature of racism becomes. So, I think we defeat it first by refusing to turn a blind eye, by gathering information on the issues and by educating ourselves on the root causes and outcomes of racism. Information gathering and education are the 1st and 2nd steps of Nonviolent Social Change. Then, I think we have to commit to doing what my father describes  as “our nettlesome task” in his book, Where Do We Go From Here: Chaos or Community?  He said that we must “discover how to organize our strength into compelling power, so that the government [and other institutions and systems of power] cannot elude our demands.”

Fifty-seven years ago, your father pronounced the historic “I have dream” speech. This dream still seems a long way off, but everyone says it is a dream that cannot be renounced. What do you think your father would do today in a situation like the one we are now living?
I believe that my father would be guided by his philosophy of nonviolence, which corresponded with his following of Jesus Christ. I think he would remind us of how we arrived at this moment and of our history of violence, racism and injustice as a nation and as what he called a “World House.” The second thing he would do is come alongside young people to undergird their protest efforts with strategies that support organizing and mobilizing to effectuate sustainable nonviolent social change. He would put a demand on influencers in the sectors of politics, arts, media, entertainment, criminal justice, healthcare and education to ensure racial equity and justice. He would also put a demand on churches to align their professions of faith with works that create just and equitable circumstances for Black and Brown people, as well as for economically marginalized communities, not only in the United States, but around the world. And he would, as he often did while he was living, share that we cannot cure violence with violence, which he said is a descending spiral. Of course, I believe he would compel us to embrace nonviolence, which is strategic, courageous, love-centered and organized, in order to realize the Beloved Community, which includes the eradication of what he called the Triple Evils of racism, poverty, and militarism.

Pope Francis launched an appeal after George Floyd’s death. He said that we cannot close our eyes before racism. At the same time he recalled that violence only leads to self-destruction.  How did you receive his words which are so in tune with your father’s?
I agree with Pope Francis that violence only leads to self-destruction. Our means must cohere with our desired end, and if that desired end is peace, we certainly cannot achieve peace with violent methods. This is aligned with my father’s beliefs, as well. He stated and believed, as do I, that “Nonviolence is the answer to the crucial political and moral questions of our time.” In his last speech, I’ve Been To The Mountaintop, delivered the night before he was assassinated, he said, “It is no longer a choice between violence and nonviolence in this world; it’s nonviolence or nonexistence. That is where we are today.” That is still where we are today. We are facing a choice between chaos or community. If we embrace violence, we are thereby selecting chaos, which ultimately leads to self-destruction in our World House. If we embrace nonviolence, we will advance in building a more just, equitable, humane, and peaceful world.

Martin Luther King said: Justice “at its best is love correcting everything that stands against love”. This is the heart of the message about the nonviolence your father embodied. How can we build this “revolution of tenderness”, as Pope Francis calls it?
I think that building a “revolution of tenderness,” as Pope Francis called it, or a “revolution of values,” as my father said, is contingent upon us realizing that there’s learning involved in the revolution. We have to learn more about each other, learn more about the condition of humanity, learn how to, as my father said, “live together as brothers and sisters,” so that we don’t perish together as fools, and learn a way of engaging and destroying injustice and inhumanity without destroying each other. I believe that way is nonviolence. Kingian Nonviolence, which The King Center calls Nonviolence365™️, is the method of thinking and acting, inclusive of six principles and six steps, that can guide us in the revolution.

The “Black Lives Matter” movement is involving the whole world. Many people, especially young people, are protesting against racism and racial discrimination in many of Europe’s capitals, and in other countries. What are your hopes for the future? Do you think that we all will take a step forward in the challenge of human fraternity?
I am hopeful that we will harness our energy to focus on the ultimate goal of building the Beloved Community, which is not a utopia. As my mother, Coretta Scott King, said, “the Beloved Community is a realistic vision of an achievable society, one in which problems and conflict exist, but are resolved peacefully and without bitterness. In the Beloved Community, caring and compassion drive political policies that support the worldwide elimination of poverty and hunger and all forms of bigotry and violence.” If we have this mutual, powerful ultimate goal, I believe that we can travel the road of nonviolence to get there. We have the capacity and the rising passion to do that. Now, we must employ the will in our stride toward building the Beloved Community.

Speakers call for change during funeral for Rayshard Brooks